A shot from the revolver of the Rhode Island policeman went off by mistake. The bullet hit Jim Langevin, a 16-year-old boy, who was a police cadet in a Boy Scout Explorer Program. It hit Langevin’s spine and kept going. The damage made him a quadriplegic (paralysis of both arms and both legs).

Rep. Langevin is the first quadriplegic to serve in the U.S. House of Representatives. To enter the House chamber 10 years ago, when he was first elected, the maintenance crew made the chamber wheelchair accessible and removed two fixed seats in the front row so Langevin could maneuver his power chair and effectively address his fellow colleagues. Langevin has made his reputation in Congress as an expert in terrorism, computer security, and biological warfare.

This column comes to you at an awkward time. This column will appear in early December, before the seasonal gloom causes you to cheer up others with presents. This December/January issue of Voices stays on the stands until Jan. 31, by which time you will have already broken the New Year’s resolutions you have not made yet.

More to the point, for those of us who care more about politics than football, December marks the end of the lame duck Congress, controlled in the House by the Democrats and is succeeded in January by a new 112th Congress with a large majority of Republicans (63) new members) and not enough Democrats in the Senate to break a filibuster, but enough to sustain a presidential veto.

In short, the next two years promises to be a period when NOTHING will get done. Since Congress controls spending, it is possible that legislation that was dear to the president’s heart will find itself without the money to implement. For those of you so inclined, Gloom is a gift that will not go out of style, especially between now, February first, and beyond.

This column focuses on the problems and opportunities of the elderly and disabled here in Centre County. I chose to interview and profile Langevin because of a letter he signed at the end of the summer, just as the vacuous senate race in Pennsylvania was beginning to heat up. The other signer was Glenn Thompson who represents us here in State College. Langevin is a liberal Democratic; Thompson a conservative Republican. Langevin voted for Obama’s health care reform bill; Thompson voted against it. Why are these two unlikely representatives working for the same cause?

The cause is the fight to keep local medical suppliers in business. This is a cause that affects me personally because without a battery-operated wheelchair I would not be able to go from my bed to the bathroom, or to the kitchen to make dinner, or outside to work and make a life for myself. Previous attempts to reduce costs by giving large corporations, some outside the Commonwealth, contracts to provide wheel chairs, scooters, power chairs and oxygen, have resulted in companies with unsavory reputations receiving the lowest bid and raising the likelihood that poor and middle class individuals who are unable to walk face long waits for equipment delivery, maintenance and repairs. The consequence of these waits are likely to be accidents of the kind that would force independent people with disabilities to move to assistive living resulting in cost increases many times greater than Obama’s penny pitching savings on medical equipment.

Langevin and Thompson agree to end competitive bidding and (the subject of the end-of-summer letter) to halt Medicare’s requirement that customers be given the option of renting their chairs for a 13 months, rather than buying them—through Medicare--in the first month. Power chairs are custom designed to the needs of individual patients, and forcing medical suppliers to pay for them in advance will badly damage a business that is already strapped for cash.

Langevin’s exclusive written interview of over 1,700 words is available on my blog at voicesweb.org. Thompson and Sen. Robert Casey, Jr. have expressed the desire to give you their points of view. Stay tuned.

The big issue, of course, is money. Does our country have enough money to invest in the talent of those of us who are disabled and elderly? Langevin maintains, “Individuals with disabilities remain one of our nation’s greatest untapped resources, and they continue to face challenges in accessing employment, transportation, housing and even health care.”

--Joel Solkoff, author of The Politics of Food. Contact him at jsolkoff@gmail.com or at voicesweb.org.
Posted by Joel Solkoff at Wednesday, April 06, 2011 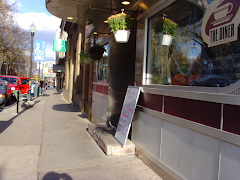 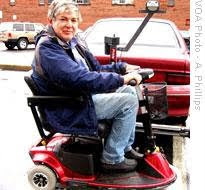